Home > Uncategorized > Want to make a fortune in overtime? Become an L.A. firefighter 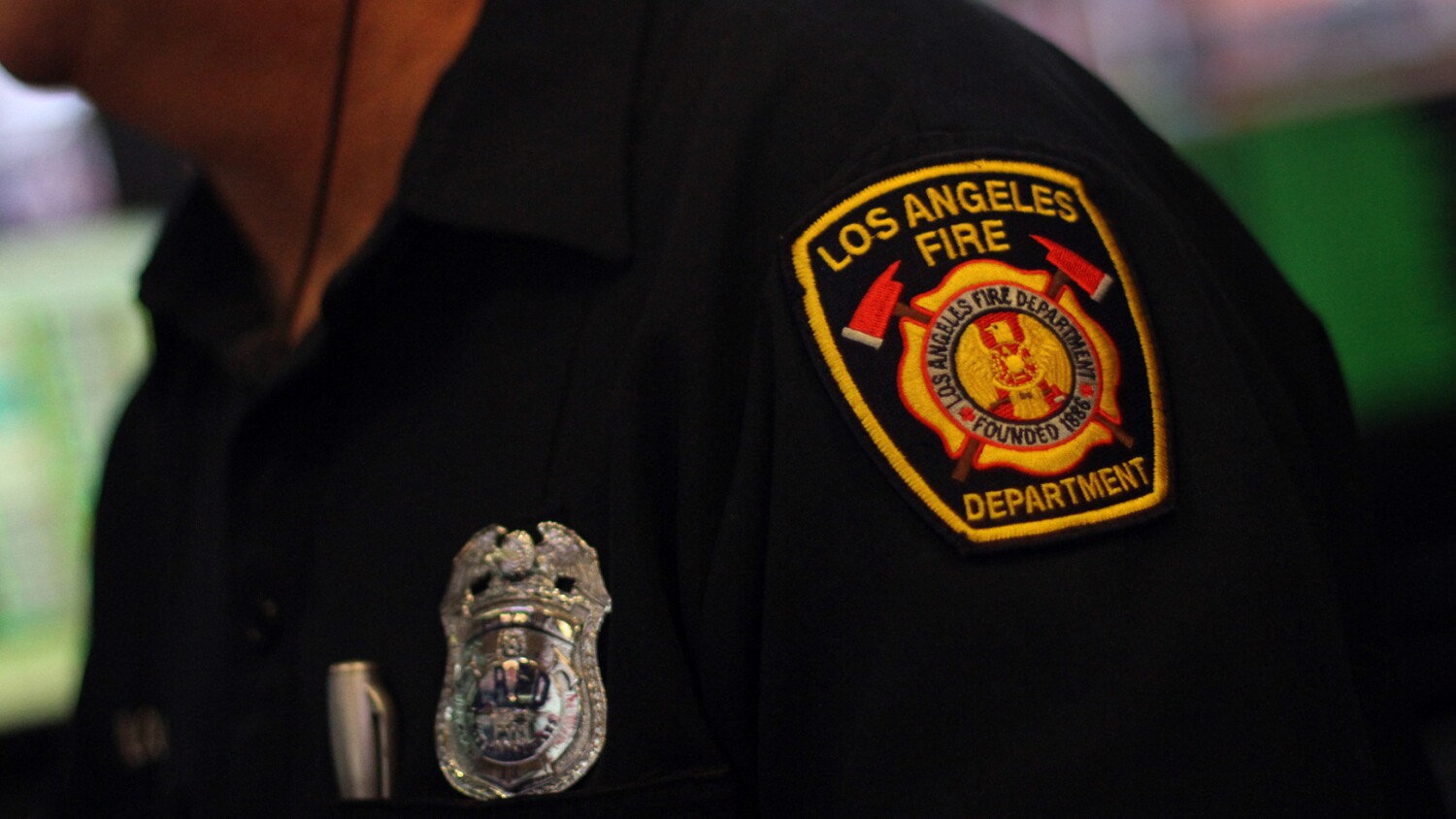 It turns out that at the Los Angeles Fire Department, coronavirus testing duty isn’t the only way to make a small fortune in overtime pay.

Last month, when I wrote about firefighters who had raked in as much as $200,000 in overtime pay at testing sites, story leads began trickling into my mailbox. And one tipster told me about the jackpot available to those who work in the division that inspects fire safety systems in buildings under construction.

That was an understatement.

I checked payroll records on two inspectors, and when you combine their regular salaries with the massive amounts of overtime pay they hauled in, their total compensation since January of 2018 was roughly $1 million each.

Not bad, right? On average, California doctors don’t earn that much.

But in the Los Angeles Fire Department, there’s a long tradition of overtime pay being there for the taking. In a citywide overtime audit by City Controller Ron Galperin, LAFD topped all departments in the 2018-19 fiscal year, with 3 million hours of overtime and $192 million in overtime pay.

To quickly review last month’s column, it described how some firefighters working at coronavirus test sites make “more in a month than a teacher makes in a year,” as one critic inside the department put it.

Fire department officials and a deputy in Mayor Eric Garcetti’s office defended the overtime payouts, even though firefighters aren’t even doing the testing. City leaders argued that the testing is vital, public health is paramount and much of the payout will be reimbursed by federal emergency funding.

Either way, it’s taxpayer money. And in a single month, one fire captain made more than $70,000 in overtime pay, much of it on COVID detail. I checked the records of 25 firefighters who split $2.7 million in overtime pay between them between March and October, an average of more than $100,000 apiece.

As I reported, a civilian whistleblower wrote a letter challenging the legitimacy of some overtime claims. When my column ran, both Galperin and LAFD Chief Ralph Terrazas told me they would conduct reviews. On Friday, a spokesperson for Galperin and another for the Fire Department told me those reviews are ongoing.

So now let’s move on to overtime pay for building inspections.

When a commercial building or large apartment or condo project is under construction in Los Angeles, contractors and developers have to satisfy a long list of safety codes, so inspectors from LAFD make frequent visits to examine various fire safety systems.

But with dozens and sometimes hundreds of buildings going up, there can be a backlog of inspection requests, and this is where the overtime comes in. A contractor can request what’s referred to as an “emergency,” or “off-hours” inspection, and an inspector will come out before or after a regular shift or on weekends.

This speedier service comes at a premium price. Instead of the normal $254 hourly cost to the contractor, the off-hours fee is $362 an hour, with a minimum payment of $940, according to documents provided by the department.

One developer who has multiple projects in the works told me this cost of doing business in the city of Los Angeles can add up. I asked how much he shells out in off-hours inspection fees.

Thanks to a generous provision agreed to by city officials, an inspector who does an off-hours inspection is guaranteed a minimum of four hours of pay, according to a memorandum of understanding between the firefighters’ union and the city, at time-and-a-half, even if the inspection takes only a few minutes.

“The last few I’ve had have taken 20 minutes,” one contractor told me. “They’re in and out.”

And yet each time, the contractor has to fork over the $940 minimum.

A review of LAFD overtime records reveals multiple cases of inspectors doing one or more off-hours inspections on the same day they work their regular 10-hour shifts. This overtime work, along with other types of overtime, make it fairly common for firefighters to earn more in overtime than in regular pay.

The inspections unit currently has 13 inspectors, and I’ve just begun digging in while waiting to hear back from LAFD officials on the total amount of off-hours overtime payouts. In the meantime, I’ve looked at payroll records for the two inspectors I mentioned, and I’m withholding their names for now as I await a return call from them.

One of them has made $606,775.99 in overtime alone since January of 2018, much of it from off-hours inspections. Over that period, he has averaged 148.8 hours of overtime every two-week period, which doesn’t seem to leave much time for eating or sleeping. Strike up the band, because his take-home grand total is just above $1 million.

The other inspector has made $578,028 in overtime alone over that same period and averaged 89.5 hours of overtime every pay period. Add regular pay and his grand total, for just under three years of work, is $985,150.

I’m not saying either of them, or anyone else, is doing anything improper. And the overtime pay comes from private developers rather than taxpayers.

But the four-hour minimum pay requirement is outrageous, and if you’re wondering how something like that gets approved, it’s pretty simple.

The firefighters’ union is one of the most powerful political forces in Los Angeles. In a quick review of campaign donations, you’ll see that United Firefighters of Los Angeles City, or UFLAC, as its known, has been extremely kind to city officials, many of whom have eagerly waved around the union’s endorsement of them. An interview request to the union was answered with an email comment. “The United Firefighters of Los Angeles City supports hiring more fire inspectors — just as we support hiring more firefighters.”

And you can’t blame the union for getting everything it can. The blame lies with city officials who don’t push back, and who apparently don’t question an inspection system that seems full of opportunities for abuse, and seems unfair to firefighters not on the gravy train as well as to smalltime developers who can’t afford to pay the overtime and have to wait longer for inspections.

In effect, the contractor who can afford off-hours fees is making an indirect payment to an inspector, above and beyond what that inspector’s salary is. And that raises all sorts of integrity issues.

“It is really a very corruptible system,” one LAFD official told me. “It’s almost like hiring them as a consultant, so they come out and they sign you off because they know you have so many other job sites and don’t care if you show up for only 10 minutes.”

LAFD Fire Marshal Kristin Crowley told me she is unaware of anything improper going on, and if anyone knows otherwise, she’d like to hear about it. She defended the off-hours process, saying that sometimes inspections must be done quickly before a building is occupied to check power supplies, elevators, emergency lighting systems and other safety features.

Crowley told me the construction inspection unit tries to avoid giving preferential treatment to any contractor, large or small. She also said that the target turnaround time for any inspection is within three days of the request, and her staff hits that goal 85% of the time.

Even so, I told Crowley, if inspectors are logging 40 or more hours of overtime a week, they’ve got to be exhausted. If they can barely keep their eyes open, is it safe to have them signing off on fire safety systems in high-rises and other buildings, where hundreds of people could be at risk in an emergency?

Crowley said that’s a valid concern, but she tries to make sure her staffers can handle the load and stay healthy at work and at home.

Not all cities offer “emergency” inspections, one contractor told me. And although he doesn’t like having to fork over the inflated off-hours inspection fee, he prefers L.A.’s system because construction can be delayed while waiting for an inspection approval, and delays cost him money.

But there’s an obvious and less corruptible way to go. The Fire Department can stagger starting times for inspectors and schedule some of them on weekends, so inspectors would be available before and after regular working hours. Or the department could simply add enough inspectors to cover the demand.

Crowley said she can “honestly say we’re understaffed,” especially with so much construction under way in Los Angeles. She told me she has asked for additional personnel, but budget constraints seem to have gotten in the way.

Sure enough, city officials have presided over a deepening financial crisis, and there’s a far greater chance of layoffs than of hiring.

But in the Fire Department, current staffing levels offer one great advantage.

There’s plenty of overtime to go around.